The divorce process can be overwhelming and complicated. You must follow various laws, rules, and requirements. One question that often comes up in these matters, and one that you might be asking yourself if you are considering a divorce, is whether spouses must be separated before filing.

Do You Have to be Separated Before Divorce in Ohio?

Although Ohio is one of the states that recognizes legal separation, it is not a requirement for seeking a divorce. You need not have lived apart from your spouse for any amount of time or even at all (whether formally or informally). That said, separation for any amount of time might factor into your divorce, and if it does, you must be aware of specific time requirements that could affect your case.

What Are the Causes for a Divorce in Ohio?

When filing a petition for divorce in Ohio, you must state the legal reason for seeking to end your marriage. These legal reasons are referred to as causes for divorce, and Ohio recognizes 11 of them. Three in some way relate to being separate from your spouse, while eight do not. 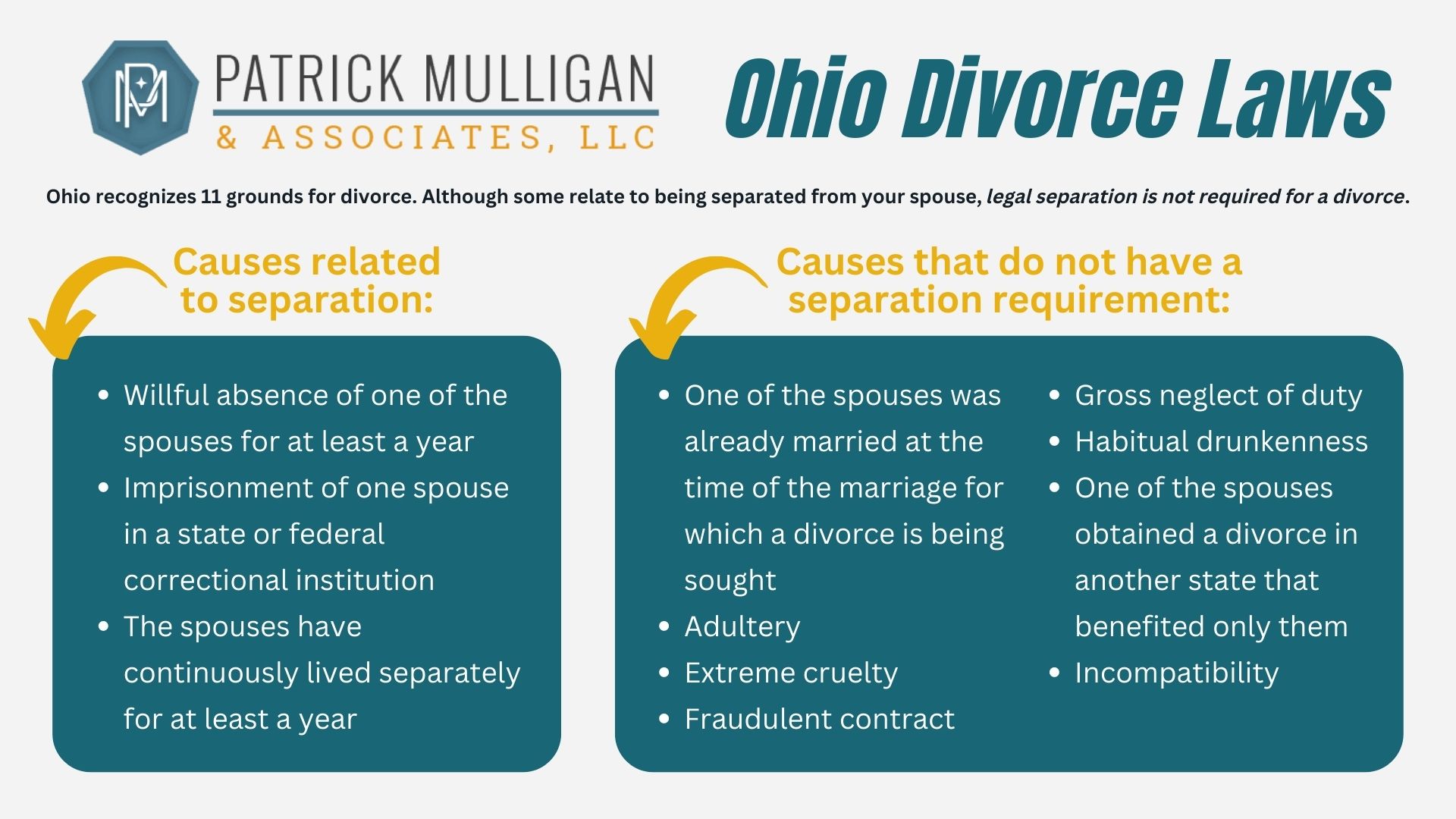 The causes related to separation include the following:

The causes that do not have a separation requirement include:

You do not have to be separated from your spouse if you are seeking a divorce based on any of the causes listed above.

What Are the Divorce Residency Requirements in Ohio?

One important thing to note if you are seeking a divorce based on separation-related grounds is Ohio's residency requirement. To be able to file a petition to end your marriage, either you or your spouse must have lived in the state for at least 6 months immediately before filing.

If you and your spouse have separated and each of you left the state for more than 6 months and then tried to file for a divorce here, your petition would not be accepted. However, if only one of you moved out of state and the other remained here, you likely will meet the residency requirements.

What Are the Functions of a Legal Separation in Ohio?

As mentioned earlier, Ohio recognizes legal separation. But if it is not a requirement for filing for a divorce, what is its function? The answer varies depending on a couple's particular situation.

Additionally, the couple decides on many issues addressed in a divorce, such as:

The final decisions are written up in a separation agreement, which is enforceable by the court.

What Is the Difference Between Divorce and Legal Separation?

The main difference between a divorce and legal separation is that the former legally ends the marriage, whereas the latter does not. Thus, the couple lives separately but remains married.

Although legal separation is not required for a divorce, it can serve as a starting point. The separation agreement can be used when filing a petition for divorce and expedite the process.

If you are considering a divorce in Dayton, our team at L. Patrick Mulligan & Associates, LLC is here to provide clear and detailed answers and guide you through the process. For the legal representation you need, call our team of attorneys at (937) 685-7006 or contact us online today.